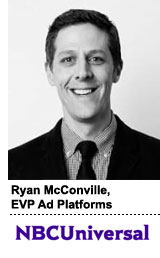 NBCUniversal wants its content to appear wherever viewers want it: places like YouTube, Roku, NBC apps, Snapchat, mobile phones and work computers, in addition to linear streams in their living room.

But scheduling ads that will light up across all of these platforms is a highly fragmented, manual process. So NBCUniversal hired former Kargo President Ryan McConville to unify its digital and linear systems as EVP of ad platforms.

“In order to be in all the places where viewers consume video content, the TV ad ecosystem has become increasingly complex,” McConville said. “The challenge is building a simplified core system that abstracts away that complexity.”

Simplifying the ad buying process across different viewing endpoints will further aid CFlight, NBCUniversal’s unified, cross-platform measurement standard. And as viewership increasingly shifts to new and emerging platforms, NBCUniversal will be able to place ads against that inventory using automation instead of separate orders for each platform.

McConville talked to AdExchanger about how data is coming to TV, the challenges of unifying disparate systems and how he’ll unify ad delivery across walled gardens.

AdExchanger: What brought you from Kargo to NBCUniversal?

RYAN MCCONVILLE: NBCUniversal was a close partner of Kargo’s for the last four years I was there. That’s how I got to know the business operations leadership team. I was attracted to the team first and foremost.

But NBCUniveral is also an incredibly forward-thinking TV business. They were doing strategy partnerships with YouTube, Snap and Apple News, and also working with startups like Kargo.

Do you think of TV as on the cusp of a big change, like the rise of programmatic in digital?

There is so much momentum in how the TV industry is reinventing itself. For example, the digitalization of TV and the automation that will happen along with it, the streaming wars, the launch of Peacock, higher fidelity audience targeting and more robust measurement. All the programmatic and data-driven things we take for granted are the last to arrive in TV, which is the biggest and most powerful marketing platform on the planet. That’s why it’s all so exciting.

What digital-type requests are coming to TV?

In my latter three years at Kargo, there was interest in buying audiences vs. content, and in business outcomes vs. impressions. I think those are already in TV to some degree. And we’re seeing more addressable TV and programmatic TV, different approaches to custom audiences, a desire to measure ROI and impact and more attribution vendors attaching them to TV.

What can TV learn from digital as it embraces data?

Hopefully we don’t need to do it exactly the same way. There were a lot of stumbling blocks in the evolution of programmatic, from fraud to transparency to supply-chain dynamics and economics that are more advanced now. I hope we can apply automation in TV in a smart way having learned what we have in display.

Why does NBCUniversal want to simplify cross-platform ad buying?

NBC as a company is dedicated to creating an ecosystem that is viewer-centric. The analogy is retail. Retail used to be a store. Then came ecommerce, mobile commerce, social commerce. When you talk to modern retailers, it’s all about having an omnichannel strategy and being where the customer wants to buy. We see the same trends in television. Some customers prefer cable while others stream on the web or watch show clips on YouTube or use a DTC app. NBC is building the ad platforms and technologies to support this omnichannel, viewer-centric approach.

What will advertisers be able to do with a unified system?

Historically, more so than today, we’ve had linear and digital scheduling and trafficking systems. We’re building converged systems that allow you to plan once. Think of the idea of Jimmy Fallon everywhere. We can place an order and let the tech optimize across all those places to find the best audiences.

Given that some NBCU content lives in walled gardens, can you get all the information you need to unify the system?

It remains to be seen. Each of these ecosystems have their own rules, so you’re not going to get the exact same signals from each system. I don’t think you’ll ever get a consistent, single ID framework for every system. So the idea is to use the best signals from those systems to create audience availability across different systems.

Is what you’re building similar to CFlight?

CFlight is a strong example of the unification we’re trying to achieve. There’s one currency, one metric that’s Nielsen-based that allows us to plan and converge linear and digital, so mid-campaign it can shift from linear to digital or vice versa, and we can report and measure cross-platform as well. That’s been a huge success. That’s an example of the future state, where the idea is going to be more about buying audiences and performance across platforms vs. doing separate orders for each platform.

Does building a unified ad system solve for consumer issues around CTV, like high frequency or missing ads?

Linear feeds are very stable and go out in one seamless stream. As you start introducing third-party VAST tags or server-side ad stitching, all of those technologies can have challenges around ads not loading or not being high quality.

We are focused on the quality of the ad experience from a content perspective, like introducing shoppable ads and lightening ad loads. We also enforce frequencies so people aren’t seeing the same ads and have standards around the quality of the ad file being served. And we’re making sure the ads are quality-checked and cached properly so they load on time. These are all important: We want to make sure people coming to NBC through digital endpoints have as high quality of an experience as they would in the linear world.