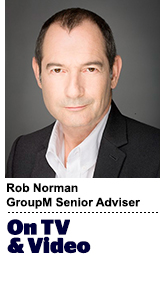 It’s advisable during a full or partial eclipse to not look directly at the sun, but rather to view it after turning your back and using a pinhole projection.

Looking at the year ahead does, however, require both a direct and unfiltered line of sight and the use of peripheral vision. The first is required because it’s essential that advertisers examine the detailed value and actions of market participants. The latter is just as important because our end customers live in an all-channel, all-platform, active, passive, analog and digital world.

In some of those channels they simultaneously read, view, search, interact, react, buy, applaud and complain. In others they may simply, slowly, yet importantly, be suggestible and persuadable as the wheels of preference turn.

This is essential because this year, more than ever, the marketer will find the fidelity of decision making upset by unprecedented static.

That static comes from a world set against a backdrop of political turbulence, of intense scrutiny of political positions taken by media sellers and advertiser. Of the nature and accuracy of content, of consumer privacy, of the collection and application of data and the role of regulators. It’s made more complex by #seeher, #timesup and #metoo, and compounded by the need to thread the needle between the commercial goals of advertising and the growing trend of corporations moving their social responsibility from their financial statements to their Twitter feeds and prime time commercials.

Prime time. What is that, exactly? Other than the Lazarus-like rebirth of NFL ratings and the NBA’s continued success, large parts of legacy television find themselves in AA: audience anemia. It’s a real problem that’s accelerated by drivers as diverse as subscription video on demand, YouTube, social networking, esports and the massively underappreciated dent in screen time made by gaming in all of its forms. Netflix has gone on record recognizing Fortnite as a competitor.

In 2019, advertisers will pursue ad-supported, over-the-top/connected TV and hold their breath hoping that Hulu and new offerings from NBCU, Viacom/Pluto and others will somehow act as a dam to hold back the tide of ad avoidance. Equally, they should press relentlessly to trade against advanced audiences and be progressive and realistic with their attribution models.

For attribution, they need to ensure that their application of peripheral vision extends to how they value actions and impressions in different channels. They must be thoughtful about the incentives they create for their media suppliers, their intermediary service partners and, critically, for their own enterprises. You never know, sometimes profit and margin are moved further and with greater durability by a shift in awareness and preference than they are by another million fleeting impressions.

This is important to all advertisers, especially the disruptive direct-to-consumer wave who have discovered (or soon will) that there is a ceiling to the potential of traditional performance marketing channels. When that ceiling is hit, you have three choices: sell before anyone spots it, pivot to a strategy that prioritizes margin and profit over user growth, or, move budgets to channels that work but with less (seemingly) binary proof. It may be that faith-based channels are every bit as effective, and that it’s OK (or better than OK) to accept proof of success via real measures of business (did we sell more stuff?) rather than via internal measures of media like reach, frequency or views.

So there it is. Enter 2019 with eyes wide open. Be agile, and be sensitive to the broader issues of the world in which we live and operate. Do unto others as you would hope they would do unto you. Pursue relevance of messaging, precision of targeting and measure what matters. Finally, think of video and consumer attention as the precious commodities they are and try to ascribe the highest value to that which really drives business performance.