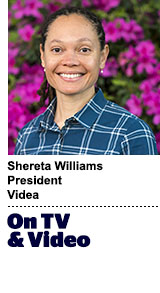 Today’s column is written by Shereta Williams, president at Videa.​

Local TV advertisers and broadcasters have heard it time and time again: “Digital’s got it all figured out.”

And then, “Why can’t you be more like digital?”

TV will likely take on some of digital’s attributes, but for now we have a few things to work out: The lack of standardization is holding back the local TV ad industry from fully embracing automation.

TV automation platforms have entered the market, but they are mostly incompatible, leaving agencies and stations unable to transact across multiple systems easily.

The market ​demands ​​a unified buying experience where none exists, so TV stations have no choice but to use manual steps to work across different systems, adding time and complexity. With the amount of technology at our disposal to create interfaces that work across platforms, it doesn’t have to be this complicated.

Unfortunately, the available technology isn’t the problem – the issue is industry buy-in.

The group aims to develop standards-based interfaces to accelerate automated advertising transactions, enabling local TV broadcasters and their media agency partners to work with any automation platform that adopts these standards.

Creating standards where none exist

While eMarketer estimates that more than 80% of display ads are now bought and sold programmatically, only 2.8% of TV advertising is transacted that way.

That offers a mismatch for marketers who have adapted so much of their buying to programmatic and would welcome TV automation. Marketers are also increasingly asking for greater insights to track their campaigns’ performance and more transparency during the buying process.

How open standards can tip the scales

Open standards would help to remove inefficiencies in the current buying and selling process. Local TV stations face workflow challenges in securing the best price for inventory because they need to estimate ratings for future inventory – a manual process that weighs on transaction efficiency.

Instead of buyers and sellers wasting as much as 30% of their time on manual steps, they could put their minds to tackling challenges such as proper attribution and audience targeting through data. Open standards would allow this type of data to surface.

Open standards and interoperability don’t imply assimilation or monopolization, but quite the opposite. APIs would allow all of these different platforms to exist alongside and communicate with each other, rather than putting up silos between competitors and cordoning off achievements. The TIP initiative is also reusing previous file formats and pooling resources to create better workflows and accuracy of information and data.

The next steps: conversation and collaboration

TIP is making good progress so far. Last November, the group contacted more than a dozen systems providers that offer components of local TV transactions and spot buying. [Disclosure: Videa was among the providers contacted.] The group will use that research to offer a set of APIs to support the electronic transfer of transaction data. The local broadcast TV trade association, TVB, is partnering and acting as a repository for the group’s work.

Despite the progress, there are still difficult conversations to be had. This worthy investment will cost money, and the industry needs to recognize the undeniable value of such an investment before agreeing to fund it.

Open standards are a necessary component in the future of automation in the TV ad industry. With enough cooperation among industry players, instead of constant comparisons to digital, TV will evolve to include the best of both worlds: incredible reach and engagement paired with ease of access and accountability.