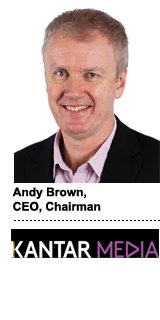 Although Kantar Media previously operated as one of 12 distinct brands within the Kantar Group, sometimes there was a lack of visibility between different brands.

“We’ve had a very strange organizational structure,” admits Andy Brown, chairman and CEO of Kantar Media. The company is in the process of unifying its many operating brands around common Kantar branding to simplify its go to market, e.g., consumer intelligence and market research firms TNS and Millward Brown will now bear the Kantar prefix.

Most people know Kantar Media for its ad intelligence business – Kantar Media is a de facto authority on worldwide brand ad expenditures – but it has several other specialties.

Kantar Media has four global specialty practices – including its ad intelligence business – each with its own P&L, except in certain countries where it might operate on more of a region-specific model. That organizational structure made it difficult to coordinate efforts for national clients.

“We’ll start to unify the business into a single country model where we’ll have markets, product and operations and where all of our brands will carry Kantar Media in the name,” Brown said.

AdExchanger caught up with Brown to talk about the future of Kantar’s measurement business amid its restructure.

ANDY BROWN: We’re creating more synergies between our different businesses. Instead of clients having four separate conversations with Kantar Media, they’ll have one conversation and we can still pull in subject matter expertise wherever needed.

We [are beginning to] integrate our own data with a client’s first-party data toeasily export that data into [third-party DMPs] or a client’s own information system, making it possible for them to pull data back in. We’re the largest provider of television measurement outside of the United States, doing audience measurement in 50 markets or so.

How has your measurement business evolved?

We announced about 18 months ago a global audience measurement deal with comScore. In (a number of markets) we’re extending television audience measurement to tag a player and overlay local demographic data to link player data back to panel data. The next step is to take that out to total video to include YouTube, Dailymotion and other video assets. We’re not in that stage in every market yet, but we’re working on it.

Speaking of comScore, what did your global alliance afford you?

Three years ago, there were several players trying to compete in the set-top box space. We decided it was easier to go in and consolidate our efforts rather than go about it in a fragmented way. So we folded our US audience measurement business into Rentrak and took a minority position. [Kantar’s parent WPP acquired a stake in Rentrak in 2014.]

We already had [an independent] position in comScore and Rentrak, so when those two companies merged, we were able to create a global alliance to do cross-media measurement. I think there’s opportunity there to leverage Rentrak’s set-top box data with comScore’s digital panel data, census data and possibly more data sources.

How do you answer critics who think a measurement service backed by a holding company is not totally independent?

At the end of the day, we are an independent measurement business. You can’t be in 50 countries doing audience measurement if you’re not independent. Period. And it’s a fairly easy shot for others to say, “Oh, they’re owned by WPP and therefore aren’t independent,” but all you have to do is ask our clients whether they feel there’s any partiality in the way we measure.

Comcast, at the moment, is holding on to a lot of [set-top box] data, but I believe that will change, whether that’s 12 or 24 months down the line. That’s the thing that fundamentally has changed in the entire measurement ecosystem – companies set a value around their first-party data so they can monetize it. The answer is not solely set-top box data, either. In the comScore-Rentrak context, we have portable people meter data, access to purchase data through Kantar Shopcom and the real value sometimes comes from [commingling] data. Valuable data doesn’t always have to come from a set-top box.

How is the addition of more third-party data changing currency?

Personally, I think currency will always be audience-based and then there will be layers on top of that, whether it’s purchase data or engagement data. I don’t see media owners selling on a guarantee basis across 100% of their inventory on purchase. For certain (sections of inventory), they will. And I think that’s a good thing. But I think you’ll continue to see a lot of data fusions, like blending set-top box with purchase data.

We have a global specialty we call reputation intelligence where we track what someone is saying about a brand or issue through digital, print and TV. It gives you a complete view across paid, earned, owned media (when coupled with our other assets) and none of our [measurement] competitors are doing that.

An example of what we might do is to produce a report for the EU on what everyone said overnight about Brexit, and we obviously do this for commercial clients, too. Nielsen and GfK are very strong on the paid [media] part, but for earned media, we’d have a completely different competitive set, like Cision or Radian6.

What are Kantar’s strengths and weaknesses in relation to shopper data, given Nielsen’s scale with Nielsen Catalina?

In the US, we aren’t the largest player in the market. But in a market like the UK, we’d have a presence of a Nielsen Catalina or Nielsen TV MRI Fusion. The short answer is, no, we don’t have enough presence in the US.

We obviously have relationships with our sister companies like Kantar Shopcom, where we might pull in data from. We are also looking to integrate [our TGI consumer survey data] with the Millward Brown Ignite [brand marketing analytics] panel. That way, we can do measurement on the back end.

We’re very strong in knowing who you reached and where, but with our partners across Kantar, we can start to take an attitudinal standpoint – did it move awareness or purchase intent? We are the currency for many global CPG brands with our Kantar Worldpanel.