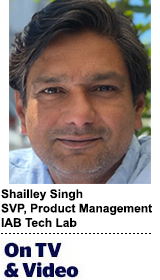 The words we use matter.

Last month, for example, the Media Rating Council recategorized the term “over-the-top” as “connected TV,” which is what most people in the industry mean when they refer to streaming.

The distinction is important, because it helps buyers get on the same page when they’re purchasing CTV inventory.

But updated definitions won’t solve all the challenges that plague CTV.

For one, scammers are targeting server-side ad insertion to trick advertisers into paying for ads that are never actually seen. There has also been a lack of collaboration between measurement vendors and ad servers to determine if a TV is running ads while the screen is off, as there are few integrations between SSAI servers and vendors.

To combat these problems, the MRC has called on the industry to adopt solutions developed by the IAB Tech Lab, such as Ads.cert, which authenticates legitimate SSAI data and is set to roll out this month.

There is “a sense of urgency” to deal with these issues before CTV, like the display world (see: Methbot), becomes the playground of fraudsters, said Shailley Singh, the IAB Tech Lab’s SVP of product management.

For instance, the IAB Tech Lab has extended several of its existing fraud-fighting tools to the CTV environment, including Ads.txt (which allows publishers to declare who sells their inventory), Sellers.json (which allows buyers to verify sellers) and App-ads.txt (which is like Ads.txt, but for apps). The Open Measurement SDK, which helps verify whether an ad was actually delivered in a mobile or web environment, will be available for CTV later this year.

How did the IAB Tech Lab and the MRC collaborate to craft updated guidelines for CTV, and what were some of the main challenges?

SHAILLEY SINGH: We’ve been working closely with them ever since we started the Open Measurement SDK project [in 2018] to ensure that whatever we build will get the accreditation that it requires.

It looks at things like volume, for example, and then broadcasts this information. The verification providers like Moat or DoubleVerify can listen to these signals and share final viewability numbers with their advertisers.

Why do you need an SDK to do that?

You need a native software library to do all of these calculations.

Before Open Measurement SDK, each of the verification providers had their own proprietary version of that software library, which becomes very difficult for publishers who want to work with 20 advertisers.

Some may want Moat or DoubleVerify, while others may want Integral Ad Science or Google’s Active View. That would mean having to install five or six different libraries into my software and managing them.

And these are black box libraries because they’re proprietary. The troubleshooting is difficult, management and maintenance is difficult, and that makes it harder to scale measurement on devices.

With the Open Measurement SDK, there is one SDK that the publisher can install that is open source and sends out signals that can be used by all of the verification providers. It makes the data consistent across all campaigns, across all devices and across all providers.

Fraud and measurement have been major challenges in SSAI. What is the IAB Tech Lab developing to help fix these problems?

We look at security in the supply chain broken down into three buckets: authorization, authentication and verification.

The best entity to answer that for me is CNN itself, because they can create the Ads.txt entry saying that someone is allowed to sell me CNN Newsroom inventory. We’ve already released the Ads.txt version for connected television, and there are platforms that have already started implementing it.

Authentication is where Ads.cert comes in. It’s like showing your driver’s license when you check in at the airport. It’s a technology that allows an SSAI server to sign a request so I know that this is the exact server or entity that I want to work with – and I know that the request is coming from them, not somewhere else. After we complete our SSAI use case, the next one we’re targeting is signing the bid request in the bid stream.

Verification is the Open Measurement SDK, which does a final confirmation that an ad reached a device, was actually seen by a user, was on the screen and the TV was on. We’re starting out with Apple TV and Android TV. Android TV is going to cover a wide range of devices, like Fire TV and Chromecast. Then we are working very closely with Roku. Together, that would give us coverage of about 70% to 80% of where the revenue is today with those three platforms.

Some say that sellers have been slow to adopt Ads.txt. Why is that and what can be done to encourage the industry to use these tools more?

Adoption is pretty good [on the sell side]. The challenge with Ads.txt is that it’s a huge amount of data and there are some complex relationships that people have in the ecosystem.

The buyers using all of the data, the ones who make buying decisions, need to adopt it. I think that that’s the part that needs to be pushed more by the industry.

Is fraud in CTV as prevalent as people say since most inventory is bought direct?

There is definitely some fraud.

When advertisers are buying direct, there’s probably no fraud happening there. But when you come to the subset of what is being bought through open bidding platforms, that’s where the fraud will be.