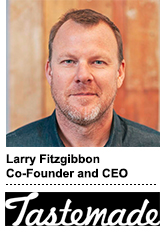 With more easily digestible food content crowding social media feeds, Tastemade is staying a step ahead of its competitors by launching its own digital TV channel, Tastemade TV.

“Our programming strategy has been to reach [social media] consumers where they are,” said Larry Fitzgibbon, Tastemade’s co-founder and CEO. “One of the new things for us is that we’re starting to create long-form content. That means the television screen is opening up to us as well.”

AdExchanger caught up with Fitzgibbon to discuss Tastemade’s next steps.

AdExchanger: Tastemade had some new investors this round, including Amazon. How will Amazon support you in the future?

LARRY FITZGIBBON: We’re super excited about adding Amazon as an investor. We’ve been working with them over the years in a variety of ways, primarily through licensing content to Amazon Prime, both into the core of Amazon Prime as well as the fact that we’re an add-on channel to Prime membership. We’re excited to continue to work with them on those projects, new ideas and obviously we’re looking for new ways in which we can collaborate.

What are some new projects you’d like to develop with Amazon?

Not right now, it just happened, so certainly we’re connecting with them and talking about things we could potentially do. But nothing to announce right now.

Can you tell me about launching Tastemade TV?

One of the partnerships we struck earlier this year is the distribution of a 24/7 linear network [called Tastemade TV], distributed through YouTube TV, which is a skinny bundle. They aggregate networks like ESPN, ABC, NBC and all the traditional cable networks, but we’re the only lifestyle channel within that bundle. We’re starting to distribute that channel to more platforms.

Where can consumers find it?

We’re live on YouTube TV, we’re live on Philo, which is another skinny bundle. It’s also available through Tastemade’s apps on Apple TV and Roku. It’s available on Amazon Prime, where we’re an add-on channel. And we just announced we struck a new partnership with T-Mobile to bring [Tastemade TV] to its platforms, which will happen later this year.

Our approach to date has been focused on extending what we do with brands around sponsored content to that platform. We think it’s a new platform where we can connect with consumers in a deep way.

I think when people sit in front of their television or they’re watching television on their mobile device, they’re more inclined to lean back and watch longer-form content. That’s obviously an awesome place for us to integrate our sponsors through sponsored content, as well as running more traditional ads on that platform.

Who are some of the advertisers you work with on your various verticals?

Over the years we’ve worked with different brands. Starbucks is an example. American Express, Hyundai, Allbirds – those are just some of the ones we work with.

The thing that differentiates us is, one, we’re not just short-form. We create short-form that is popular on some of the platforms, but we also create episodic medium-form that ranges from three to 15 minutes, and now we make long-form, television-length content.

So part of what makes us different is the spectrum of content we create. We started within the short-form environment back in 2012. We’re deeply passionate about our category, and I think that’s one of the things that differentiates us from others: When you see a Tastemade video, you know it.

We have everything … [including] host-driven content. That’s part of what makes us different from others. There’s a lot of people in the space who do hands-only recipes, which obviously we do too, but some of our most popular shows are hosted.

One example is a show we do called “Struggle Meals,” which hosted by Frankie, who’s one of our Tastemakers. That show originally launched as a Facebook Watch show, where it continues to be extremely popular, but we also recently brought that show to Snapchat as a Snapchat Show as well.

Do you think the bubble has burst for advertisers looking to capitalize on viral short-form content?

“Viral” is a pretty loaded word. What I would say is there’s no doubt the consumption of short-form video has been growing and is continuing to grow. Sometimes it can be viral, and we’re in the lifestyle category so sometimes our content can blow up.

But this content, whether it’s in food or travel or home and design, is what people are interested in every single day. So we rely a little less on things going viral and more on delivering awesome content that consumers want to consume.

Why is Tastemade a good option for TV advertisers?

We can connect with the audiences they’re trying to reach, which are millennial audiences, but do it around premium content. That’s the one-two punch that really works for the advertisers.

What’s your road map for the next year or so?

Obviously with the launch of Tastemade TV, that’s a whole new opportunity for us. We’ll be continuing to invest there, both in our distribution and original programming to power that channel.