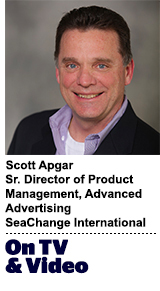 Targeting is done through the physical separation of delivery network across the copper wire – or via satellite or IP delivery – at just a regional or metropolitan-area level based on a customer’s quadrature amplitude modulation delivery network,

This ad sales model is an inefficient and operationally expensive process, with many manual steps and room for mistakes. The ads come from the advertisers, who may not always get them to the right playout system when needed.

This process accounts for much of the revenue loss in the current linear broadcast advertising world. If the ad didn’t get to the video ad server in time, no ad will be played, resulting in lost revenue. And to complicate matters, as the consumer trend continues to move toward cable cutting, there are fewer eyeballs on traditional broadcast channels, and traditional providers are losing audiences to over-the-top streaming vendors.

The quickly transitioning OTT ad insertion model is much different than a broadcast model. The content is delivered directly to targeted, individual user devices and tracked and adjusted in near real time, rather than days ahead of time.

In the OTT world, providers and advertisers can tell exactly when and what content a customer watches, because they are clicking on and “asking” to view a specific program, enabling personalized targeting at the subscriber level. This allows advertisers and providers to make a dynamic ad decision based on what ad is most relevant to the targeting profile associated with the customer ID.

With OTT content delivery, the ad insertion model is fully targeted, happens dynamically at the time of viewership and can be measured directly and accurately. The ad choice can be programmatic and happen based on rules designed to select the most appropriate ad for the subscriber. This allows for programmatic sales of unsold inventory, further increasing ad revenue. The ad content is also delivered from the central site to each individual user and counted exactly for very accurate billing.

So, with all the benefits, why aren’t we seeing faster adoption of the new OTT deliver ad insertion model in the video space, and why are people hanging on to the linear broadcast model?

Personally identifiable information: Currently, there are big concerns about privacy rules and the sharing of subscriber-based information. Providers are afraid to share their subscriber-specific information, so advertisers don’t always have access to what they need. The big search engines and providers are hoarding all the click information they’re collecting. They don’t want to give it up because of these privacy concerns. While it may be easy to identify who is asking for the playout, it’s not so easy to associate proper targeting criteria with the identification unless it’s the provider’s own service using their own subscriber information.

Propagation of advertisements: Propagation means the copying of ad content – the MPEG and HLS files across the nation. With the old model, ad sales teams knew what ads were scheduled and ensured that they copied the ads to playout servers beforehand. They also knew exactly which servers had the ads scheduled, so they could reduce the number of copies needed. In other words, if in Canada and there were French and English versions of an ad, only the French version was copied to French-speaking neighborhoods, not the English version.

In this new world, it’s nearly impossible to tell where an ad will be played from, so ad sales teams are copying all versions of all ads everywhere. Therefore, the content management systems are now very important to ensure that the right ad content is delivered everywhere it’s needed. This is considered a barrier to adoption, because content management systems are just now growing and evolving to enterprise-class functionality.

The playout equipment: Providers have already invested in playout streamers, splicers and the rest of the equipment needed for the legacy system to push ads out to set-top boxes. Now we’re moving to a model where the video player software on the consumer’s playout device is responsible for asking for the video and playing it, rather than tuning in to a broadcast channel and viewing the video that is being delivered from a video playout system to all users on that channel.

The process now has each client player using network bandwidth to access content on the content delivery network, including requests to a digital rights management system for decrypting protected content. The network requirements for delivery are scaling up as each individual request for the same movie must be handled on the network, requiring investments in network infrastructure to build out more bandwidth.

Developers and providers are moving very quickly to add content, services, features and capabilities. But they need to take time to reevaluate their legacy advertising insertion model and modernize its capabilities along with the evolving, very dynamic delivery system.

Video providers have the tools today to control, manage and monetize their multiscreen/VOD offerings. With personalization, customer management, merchandising, reporting and analytics capabilities, video providers can deliver a rich and engaging viewing experience, including contextual targeted advertising, to their customers.