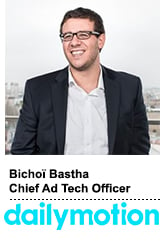 Dailymotion has been hard at work during the last 18 months.

The video-sharing company has built its own ad tech stack, including a programmatic platform, which it had wanted to build since 2013.

A few key changes helped redirect Dailymotion’s course over the last few years. In 2015, French media conglomerate Vivendi purchased an 80% stake in the company. Vivendi integrated Dailymotion as its distribution and monetization platform while it provides content.

Over the last year and a half, Dailymotion has worked internally to launch new platforms and functions, but also to differentiate itself from the competition, namely YouTube.

AdExchanger: What was the main goal of Dailymotion’s revamp?

BICHOÏ BASTHA: The focus was to be the home for premium video and the home for videos that matter. So this is what we have been doing for the last 18 months.

We have revamped the old platform. We actually threw all the old code away for the consumer platform, and we launched our new platform that is built to surface our premium content on the subjects that people care the most about.

How are the early results?

We have seen that the premium video audience has doubled. We work with about 2,000 partners as well. And again that means that we have built a platform that reaches about 250 million uniques a month, and we do about 3 billion views overall each month. So that’s on the consumer side of the consumer platform.

We had to build a platform that helps content partners that we work with to manage their videos and their monetization. So we’ve built fully integrated end-to-end solutions for publishers. Publishers really benefit from a full value chain to host their content, stream their content and distribute it on our platform and player. Releasing that platform has been a big part of the Dailymotion revamp.

What else have you built in the revamp?

We have developed and released our own programmatic ad tech platform. Dailymotion is now hosting the content, streaming it, monetizing and distributing it. We have our connections directly with the buy side – with the DSPs, we connect with the ad servers of our content partners, and all of that is managed with our own stack.

When did you release this programmatic platform?

It was released during the last few months. We have been sunsetting the previous programmatic platforms we were working with to only focus on this one platform.

Why did you decide it was important to build the programmatic platform?

It started in 2013 when we realized that video would be a part of the programmatic trend. In 2014 we said, “OK, we are seeing that with companies like Adap.tv or SpotXchange that programmatic is going to come to video.”

And we looked at the landscape and realized that we were big enough as a company and as an audience to create our own exchange. And so we partnered with multiple vendors: LiveRail at the beginning and then FreeWheel after LiveRail had been shut down. We took them as technology providers but we created relationships with the buy side and DSPs back in 2013.

Where are you getting the data to power this programmatic platform?

We are getting data from our users as they journey through the platform, and also from users’ exposure on the Dailymotion player outside of Dailymotion’s owned-and-operated [platform].

So exposure to Dailymotion’s player provides us with a lot of data about how users are consuming our content, as well as all the content we get from our content partners. That’s actually why we also invested in building our own ad tech. We can better share information about what the content is about with the buy side. If you use a third party that is between you and the buy side; it controls that. Whereas we can now say what the data is around the user and the content when a buyer wants to programmatically buy a piece of inventory or a piece of content.

How is this different from YouTube’s approach to video content?

It’s a totally different philosophy from YouTube. We don’t want to show you thousands of videos of premium videos next to a UGC video that you probably won’t care about. We want to show you the videos that will matter to you as a consumer, that are trending now and what we think would make sense for you. And I think this is a different approach than just giving you access to thousands of videos like when you open the YouTube app. Our approach is really about how we can give you access to the videos that matter to you.