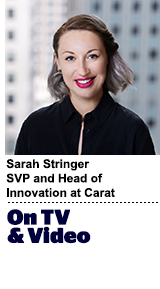 Today’s column is written by Sarah Stringer, senior vice president and head of innovation at Carat

“Friends” may have launched in 1994, but thanks to streaming platforms, the show is as popular as ever. When it appeared on Netflix in 2015, new generations were introduced to the hit sitcom, which originally aired on NBC when television was tragically limited to only weekly, episodic viewing.

The times are different now, fueled by binge viewing culture, causing a new war for streaming rights and evolving the content distribution model. Streaming technology has leveled the broadcast playing field, enabling premium content studios to develop their own direct-to-consumer streaming platforms, causing friction between creators and distributors as the landscape remains cluttered and uncertain.

The pending launch of a streaming service from WarnerMedia (an AT&T entity) in late 2019 will also put Netflix under increased pressure to find evergreen popular shows, and with the anticipated launch of Disney+, Netflix has taken a more aggressive stance with Marvel Studios, a key content partner.

With its studio and broadcast ownership of Disney Animation, Disney live action, Marvel Studios, Lucasfilm, Disney Channel, Disney Junior, ESPN, ABC and Fox, Disney+ will cause a shift within streaming, and it has caused friction with Netflix, which abruptly halted new seasons of Marvel’s “Daredevil,” “Iron Fist” and “Luke Cage.” Battle lines are being drawn and the drama that comes next will likely rival the final season of “Game of Thrones.”

It’s not just content creators and studios that are getting into the distribution game. Apple made a massive splash at the Consumer Electronics Show, leveraging some of its biggest competitors. Announcing the integration of iTunes and AirPlay in Samsung TVs demonstrates a realization that a closed ecosystem only gets Apple so far. By investing in its own original content, Apple realizes its need to go beyond selling hardware and add a new set of services and content to its already significant business.

These platforms all offer new ways for advertisers to partner and think beyond the traditional spots. Disney launched ESPN+ in April 2018 as a companion to cable services, rather than a direct replacement. Its subscription model shows a limited number of ads rather than a full ad-free model. Disney also currently owns 30% of Hulu (soon to be 60%), which has success in finding the right balance for viewers willing to pay premium for ad-free vs. ad-supported content. These experiences help inform the model for Disney+, which is widely speculated to be ad-free.

However, all is not lost for brands looking to leverage these platforms. We are seeing the rise in advertising opportunities with production houses, allowing for in-program product placement. Oreo leveraged a partnership with Netflix favorite, “Stranger Things,” to have its ’80s dunk commercial featured in the show. We’re seeing production houses lean into using well-loved brands in their storytelling, which is building fruitful relationships. Kellogg’s Eggo Waffles now supports “Stranger Things” via social campaigns, after seeing a 14% year-over-year boost in sales, thanks to character Eleven’s obsession with the breakfast food.

The biggest issue for these platforms will be determining how costs are passed on to viewers. Just how many bundles will people be willing to pay for each month? With Hulu, YouTube Live TV and Netflix announcing a spike in prices, we could expect to see further acquisitions amongst streaming services. We may even see a swing back to established TV, with companies making substantial investments and acquisitions in the streaming space. Viacom acquiring Pluto TV and Comcast rolling out Now TV, buoyed by its acquisition of the United Kingdom’s Sky, shows legacy providers are leveraging streaming’s expertise to create improved experiences for their own viewers.

Ad-supported platforms are definitely not going away. Tubi.TV, the world’s largest ad-supported VOD platform, reported revenue growth of more than 180% in 2018, demonstrating an appetite for ad-funded platforms. Consumers want to find the balance between premium services and ad-supported content. Don’t expect ads to die out, but we will see traditional TV ads move aside for a data-enhanced experience that make ads more relevant, targeted and, hopefully, less annoying.

Brands will need to evaluate their approach to streaming to understand what their consumers care about and how they consume their content, and how they can partner through data, product integration and even original programming to leverage this growing trend. It’ll take new focus, talent, resources and new thinking for brands to fully take advantage of these opportunities, but the benefits will be undeniable and ongoing.