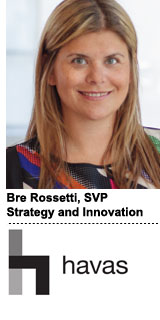 For Gabrielle Rossetti, leading innovation and strategy for Havas sometimes means acting as a scout on behalf of brand clients.

Even if a tool doesn’t fit into a client’s tactical tool kit, Rossetti’s team can help them build a blueprint for the future.

“It’s about helping them understand where they can innovate and the technologies and trends they should be thinking about,” Rossetti said.

With advanced TV’s growth spurt, Rossetti has been busier than ever. But the biggest challenge for video and TV buyers today, she said, is separating the wheat from the chaff.

“I talk to a lot of companies in the advanced TV space, and they’re all solving different problems,” Rossetti said. “Today, it can be hard to figure out who’s real, who’s me-too, who has brought the promise to life or who just created a PowerPoint deck.”

The platform aims to drive more engagement with linear and over-the-top (OTT) TV ads by enabling commerce and interactivity. Connekt claims it then augments artificial intelligence to analyze which content contributed most to conversions.

Connekt just formed tech and distribution partnerships with Nielsen’s Gracenote, CBS, HBO, LG, Sony, Showtime and TiVo, which is what attracted Rossetti to the platform.

“Right now, we’re buying up against the walled gardens like Amazon, Facebook and Google,” she said. “When [platforms] have the power, it has to be the clients who really demand attribution solutions and who use their own data to determine what results mean for them.”

Rossetti said achieving the kind of scale that Connekt has with Nielsen’s Gracenote and partnerships with several big TV OEMs is critical for buyers to prove performance in newer channels like OTT.

And despite the newfound emphasis on data in TV, Connekt CEO Mike Fitzsimmons says scale is still the No. 1 request his company fields from advanced TV buyers.

But one of the trade-offs with addressable TV is that a marketer must often sacrifice reach in favor of precision to apply data and more granularly execute campaigns.

The same issue applies to connected and OTT TV because of the fragmentation.

Even if a virtual MVPD or streaming video service has good data, it doesn’t always have scale.

“With all the dollars they invest in the medium, buyers want to have a return path to the user to better acquire new customers and measure the effectiveness of their advertising,” Fitzsimmons said. “And, if a marketer wants to make impact and really move the needle on audience, they need to be able to do that in as many households as possible.”