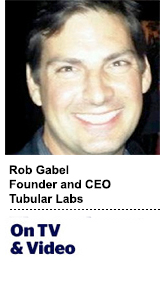 Today’s column is written by Rob Gabel, founder and CEO at Tubular Labs.

Stuck inside for more than two months now, many of us have looked toward new interests to help occupy the time away from work and/or parenting (however fleeting those moments may be).

Some have turned to baking or cooking, others are discovering new shows and movies. DIY arts and crafts can help occupy children through tough weekends without parks at our disposal. And if you don’t get a workout chasing kids, perhaps you’ve used this time to embrace physical fitness. My wife and I have taken HIIT classes on Facebook and now joke about meeting our “celebrity” trainers.

From a content perspective, one of the quarantine’s biggest winners is the gaming industry. After decades of existence and a fervent social media following that’s boomed in recent years, it appears that video games have finally taken the next step into legitimate community engagement.

Socialization around gaming isn’t new. But socialization as gaming has only recently entered the forefront. Early tries at this, including Second Life, The Sims or even Pokémon Go, only scratched the surface of what gaming socialization could be. In the middle of a pandemic, Fortnite and Animal Crossing, among others, are not just surviving on socialization as a core feature, but thriving as a result of it.

Without bustling real-life communities right now, many millions of worldwide users are flocking to these virtual environments to check some basic boxes for human interaction: conversation, friendship, leisure, etc. The results have been incredible and should force a complete recalibration for how gaming is thought of as an entertainment medium.

Travis Scott held a concert on Fortnite and more than 12 million live viewers showed up in-game. Fortnite followed that up with Steve Aoki and deadmau5. On Animal Crossing, there’s a native and thriving economy all its own in which brands are finding ways to make strides. Users can also keep adding elements to that world, from clothing to environments, creating dynamic and new meeting places for long-time friends or brand new acquaintances.

Better still, these moments of community are being captured and shared through social media platforms. During a moment in time when there are no live sports and premium television is at a premium, it’s turned a bright spotlight on gaming as new, competitive content that can engage with users. Brands such as Adidas have participated in gaming events endemic to their business and sponsorships in the sports world. ESPN’s found a captive sports audience currently underserved by content and has broadcast various gaming tournaments – from NBA2K featuring real NBA players to an EA Sports Madden event featuring celebrities.

Those are just the more obvious opportunities for video creators to manufacture connections with audiences. As we’ve noticed with Fortnite, a less-obvious integration like a first-person shooting game can have its own interesting chemistry that gets the world tuning in.

This is also an interesting inflection point for gaming that could lead it down a different path that more resembles the content that sprouts up around it.

Community is becoming the main reason people are playing games and sharing content about them – whether it’s something on their mobile device, a quick round of Super Smash Bros. or hours of Fortnite. That’s not just because we’re in the middle of a pandemic. It’s because people inherently like socializing.

Taking cues from that dynamic, new games may be geared more and more toward engaging within a community and sharing content about gameplay than the gameplay itself. Obviously the games need to be fun and get users to want to share. But something that creates experiences you want to recreate and repeat inherently does that, no?

I’m no game producer, but I like to think I know video content. And I’m looking forward to seeing these worlds continue to converge, to the benefit of everyone.