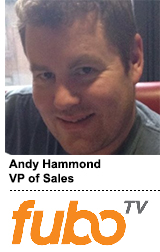 In August, the video startup inked a deal with Turner to add even more sports and news coverage to its docket. Turner Sports’ live coverage of the MLB, NBA and NCAA March Madness, along with the company’s non-sport channels such as Cartoon Network and CNN, gives consumers and advertisers much more choice on FuboTV.

“There’s an inherent connection between advertising and sports and I think Fubo’s been able to really take advantage of that,” Andy Hammond, FuboTV’s VP of sales, told AdExchanger.

As the OTT space becomes increasingly crowded, FuboTV has grown rapidly by staying laser-focused on its sports niche and dedicated fans. The company has raised $151.3 million in three years and expanded its base offering to more than 75 channels. With Fubo Extra, which launched in April, customers can pay an additional fee to access 90-plus channels.

Hammond spoke with AdExchanger about FuboTV’s foray into digital ad insertion and how its professional friendship with Turner is a slam dunk for advertisers.

AdExchanger: How has Fubo’s audience changed over the last year?

ANDY HAMMOND: If you take a look at our audience at Fubo and then check out the comScore numbers, our monthly unique users are now up over 115% during the past six months or so. That relates directly back to the ad inventory that we have available, and therefore [is] driving ad revenue for us.

In terms of monthly uniques, we’re over 1.15 million, and that’s just desktop and mobile. That doesn’t include connected TV (CTV) because comScore hasn’t been able to measure our CTV yet. CTV makes up over 75% of Fubo’s consumption, so we expect that number to be much higher than 1.15 million.

Why was Turner the ideal network for FuboTV to partner with?

There are always going to be partners out there whose content is incredibly valuable to the viewers and to FuboTV’s current subscribers, as well as new potential subscribers. Turner certainly ticks that box.

When you think about how FuboTV is the only OTT platform for connected TV that’s focusing on sports, we’re carrying a lot of other content. Sports is what we lead with. So when you think about that and national and regional sports coverage, adding Turner just makes perfect sense for Fubo.

Fubo has more regional sports networks than any other virtual MVPD. With the addition of Turner, we get the national games, playoff games, the NCAA, so much more basketball coverage than we had previously. We didn’t have CNN until now. We pretty much have every major news channel on Fubo.

How does this partnership benefit advertisers?

From an advertiser’s perspective, we’ve now got all sides of the political spectrum covered. When you think about the midterm elections for political advertisements, you’re adding CNN on top of all the other news channels we have. Political advertisers can target based on geography, but they can also layer on audience data and target people based on how they’re registered to vote.

How does Turner factor into this political opportunity?

Adding Turner is great for subscribers because they’ll have all the additional basketball coverage and league games plus the golf that they carry. And the price isn’t going up for consumers. From an advertising point of view, it gives us new opportunities in political and sports advertising.

An advertiser can now come to us and say, “We want to run against NBA basketball.” So we can place their ads on all the different regional sports networks that have live basketball, and also the basketball games that are going to be on Turner’s channels.

How does this new ad strategy apply to other sports?

We’re heading into the baseball playoffs and again, through regional sports networks, we carry 30 of the MLB teams. So an advertiser can start advertising in the last two weeks of the season, when the baseball season gets really exciting and viewership goes up a lot. By adding Turner to that, they now have the MLB on TBS, they have their exclusive coverage of the American League wild card game. And then they also cover both the division and championship games.

You add that to all the baseball we already carry on Fox and it really rounds out a lot of our coverage.

How have FuboTV’s advertising opportunities expanded on connected devices?

At this time last year, Fubo was already testing with dynamic ad insertion across all our platforms. It was in beta on all the connected TV devices, so Apple TV, Amazon Fire, Roku and Android TV. We’ve had that capability for almost 12 months. We really rolled it out of beta in January.

As an independent company, for us to have that capability for advertisers ahead of some of the biggest names in media – ahead of Hulu Live, DirectTV Now and YouTube Live – that’s huge.

When we were doing our beta testing, we partnered with about 150 advertisers for it. Since we launched in January, over 1,000 different brands have successfully run campaigns through FuboTV. A lot of them were Fortune 500 companies.

We’re continually updating our apps on connected TV devices, but the ad insertion capability has been there since we launched it [out of beta] at the beginning of this year.