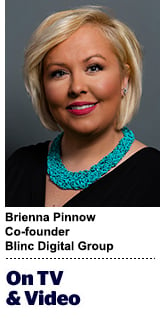 For the past year, the advanced TV world has been on a bit of an M&A tear. Over the last 12 months, we’ve seen exciting moves from players such as AT&T bringing on board digital frontrunner AppNexus, Disney acquiring 21st Century Fox, Viacom buying streaming service app Pluto TV, Amobee scooping up Videology, Nielsen’s successful bid for Sorenson Media in a bankruptcy auction, and even Sinclair Broadcast Group writing a $10 billion check for an arsenal of sports networks from Disney.

However, I believe that it is one of the industry’s most recent acquisitions – Altice’s $200 million purchase of Cheddar – that has the greatest potential for success in both the short and long term. Besides being described as “the CNBC for millennials,” what is it about Cheddar’s approach that makes it so appetizing to a more traditional cable operator like Altice?

For years, the networks you know and love (think CNN and Bravo) have traditionally worked with the distributors of their content (think Spectrum) to ink programming contracts. The TV providers pay the content creators for the programming, whether subscribers watch or not. Network blackouts are the fun dead screens you see as a result of stalled negotiations.

Insert Cheddar. Rather than focusing on guaranteed upfront revenue and prickly contract negotiations, the company has taken a hungry, maverick-style approach that relies on more carrier-friendly deals like simply sharing ad revenue. The company’s mantra? Get in front of eyeballs, and the dollars will follow.

This means that in true millennial fashion, Cheddar is anywhere and everywhere. From MVPDs like Spectrum to OTT players like Sling and Hulu to free TV platforms like Pluto, Cheddar has set itself up (even better than some long-time programmers!) to acquire more of advertising’s most valuable asset: attention.

Cheddar’s distribution partner approach isn’t the only thing oozing millennial vibes. It’s the content, too. With the former president of Buzzfeed at the helm, it should be no surprise that the company aims to deliver fast-paced, nonpartisan and often short-form business and news video content that can also be accessed and shared across social media, from Snapchat to Facebook to Instagram.

Cheddar’s pursuit of this hard-to-pin-down audience, which will have an anticipated $1.4 trillion in spending power by 2020, is evident in its own bargain purchase of Viacom assets. The company’s college-focused offering, CheddarU, is now delivered directly to more than 9 million students across 600 campuses and 1,600 screens, making it the No. 1 out-of-home network amongst millennials, according to Nielsen. Another slice of Cheddar’s media portfolio wheel also includes a digital footprint with ownership of RateMyProfessors.com.

As a consultant, I love to use breadcrumbs like job postings and even employee reviews to get a slightly better understanding of where a company has been and where it’s going. One consistency about the Cheddar employee feedback is that the organization does not suffer from the bloat that has led other well-funded media companies to layoffs.

Lean teams mean there is often plenty of work to go around, but it also means that there is typically easier access to the C-suite and the opportunity to make an impact. This means Altice is gaining a capable group of professionals who can do a lot with a little.

The quick math behind Cheddar’s future

Anywhere from 70%-90% of acquisitions end up crashing and burning because the deals are all about “taking” from the target company. The most successful purchases, however, answer the question, “What can the new owner give?” to spark real growth that benefits everyone involved, including the marketplace.

So if this acquisition will be the success I think it has the potential to be, what can Altice give Cheddar, besides the traditional resources like people and cash? Data and ad technology. Altice is already home to a4, the company’s end-to-end platform that makes addressable TV advertising possible. This means Altice can extend its addressable ad offering beyond its NYC-metro footprint, beyond its traditionally addressable two minutes per hour and, clearly, beyond the traditional TV set-top box.

The quick math, based on publicly available information and general industry trends:

Apply that 228% lift in value to Cheddar’s estimated projection of approximately $50 million in ad annual revenue and you have a business that could see triple digital YOY growth. If Altice takes the right steps and “gives” Cheddar the data and tech to unlock the full power of its advertising potential across Cheddar’s entire footprint, it’s not out of the question that we could see Cheddar driving $100 million or more in revenue within a year.

Don’t forget, addressability doesn’t mean just targeting capabilities but also measurement opportunities. Providing ad products, such as closed-loop campaign measurement or geolocation activities tied back to Cheddar viewers, is a relatively untapped revenue stream for Cheddar up to this point.

A good sign I’m not the only one who believes these two companies have a bright future? Cheddar’s founder is reinvesting half his proceeds from the sale back into Altice. Not to sound cheesy (pun intended), but this Cheddar deal has me feeling optimistic that the future of data-driven, cross-channel advertising shows no signs of slowing.