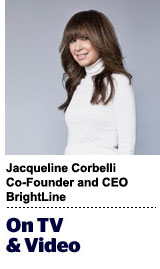 Today’s column is written by Jacqueline Corbelli, co-founder and CEO at BrightLine.

No one can deny that these days the reigning king is content, illustrated by Netflix’s and Amazon’s rapidly expanding services using original content to woo subscribers.

We’re in the golden age of TV, with more high-quality programming available on more platforms than ever before. However, as with most great things, there is a catch.

Netflix and Amazon will spend lavishly on this original content in 2017. Netflix will spend north of $6 billion on original content this year. Analysts predict that Amazon's spend will even be higher at roughly $7 billion as it supports its global expansion. Compare that to some of the major networks: Both NBC and CBS have content budgets in the $4 billion-$5 billion range.

Will the writing on the wall spell out “funding issues”? Will advertising save the day yet again?

Let’s think about the cyclical nature of the advertising revolution.

First we transitioned from newspaper to radio, and then to TV advertising. Some people initially balked at the TV ad platform, but advertisers that didn’t adapt were left in the dust. There was a similar trend with the rise of the internet, then social media and mobile.

Now, we need to strategize advertising for the internet-connected TV space. People want content – a lot of it – and they want it wherever and whenever they feel like viewing it. We’re living in the golden age of TV, and we need an advertising model that can continue to support dynamic platforms.

Why? Couldn’t Netflix and Amazon justify this level of content spend in perpetuity with a never-ending supply of new Netflix subscribers and Amazon Prime account holders? Perhaps, but this content spend may be the largest content marketing effort ever.

Netflix continues to sign up global subscribers, which are hovering around the 100 million subscriber level, an impressive number to be sure. Yet that number still pales against the billion-plus subscribers of Facebook and Google/YouTube. One could argue that as long as Amazon signs more Amazon Prime account holders, the higher content costs will be balanced by the increased spend of new Amazon Prime holders.

But is it enough? Ambitiously, Netflix plans to release a new standup special every week, featuring heavy hitters like Amy Schumer and a three-part special series with Dave Chappelle. Expensive? You bet. The company is reportedly paying anywhere between $10 million-$20 million per special.

The buck doesn't stop there: Netflix original content is accruing exorbitant fees for several ongoing shows. “The Crown” cost more to produce than HBO’s “Game of Thrones”, which easily averages more than $1 million per episode. Netflix is also investing in original feature films. In February, Netflix released the preview for a feature-length film called “Bright,” starring Will Smith, a blockbuster production with blockbuster-caliber costs.

All of this spend remains justified as long as subscription growth continues at an accelerated pace. Investment bank UBS predicts substantial income growth for Netflix for the next 15 years, which is great news because today’s earnings do not come close to justifying this lavish content spending. Netflix’s 2016 revenue was roughly $8.8 billion but its earnings were only $186.7 million.

But what if growth slows? Where will the revenue come from to justify the costs? Raised subscription rates? Government subsidies? Advertising? Subscription rates will most likely rise, but how far can they be increased before becoming unsustainable? Today’s content distribution landscape shows that more content and access options mean a greater need for additional revenue streams. Subscription models are not enough to cover the costs of making and showcasing today’s great content.

A new form of advertising has a role here. Netflix and Amazon will need to explore ad models to maintain their trajectories. In the case of Amazon, one can imagine it will consider advertising to at the very least to drive awareness and education of products within its own commercial system. With Netflix, it will need the advertising dollars to maintain a gargantuan spend in the content arms war.

Pretty much any way you slice it, advertising will be the fuel that propels the continued growth of content investment.