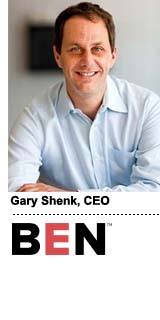 Product placements aren’t new, but with the rise of subscription video-on-demand (SVOD) services – and a reduction in cable networks’ commercial loads – branded TV content is primed to take off.

That said, it’s hard to credit a sale of a bucket of KFC chicken to Jimmy Kimmel peddling it on his late-night show, so one company is aiming to make branded content on TV and digital more measurable – and automated.

In the past, integrating a branded product into a television program was largely manual and required a negotiated deal between an advertiser and a studio or producer.

BEN aims to automate that process. It created a marketplace of product integration opportunities across traditional film, TV and OTT with attributes like the program’s duration, average air time and demographic summaries.

But because TV advertisers are increasingly shifting budgets to digital, BEN acquiredinfluencer agency Plaid Social Labs in 2015 to expand from product integrations to influencer placements in social video.

AdExchanger: What does Branded Entertainment Network do?

GARY SHENK: We work for brands and help them integrate across all kinds of entertainment, whether it’s a film or TV show on broadcast or traditional paid cable, streaming TV or social video. We’re agnostic about what is the best content for the brand, so we developed measurement that informs brands about what will perform best for them.

How do you work with SVOD networks?

They want to establish basic parameters for working with producers, but these networks are busy making content and building their own businesses. Producers love working with brands. The reason is, if you have characters drinking generic beers, it doesn’t feel realistic and doesn’t develop the character and kind of takes the viewer out of that experience.

If somebody is drinking a Starbucks, it brings the character into the real world. It increases the authenticity of the show and allows them to develop characters in more meaningful ways. It’s critical to BEN’s mission that we don’t want brands to be overt and inauthentic in how they get integrated into content. Product placement, when done poorly, has a negative impact on brands. In some ways, we’re renting audience affinities that already exist.

What do you mean?

Artists know how to create audiences, and that’s why good shows have large audiences. It’s true of someone who’s created “Stranger Things” on Netflix or a YouTube star with 5 million subscribers. They know how to connect to an audience. Our job is to offer the brand to enhance the show, but ultimately leave it up to them to weave their magic on screen because they know their audience better than we do.

How does the way you work with influencers differ from your work with the networks and producers? Is a social video view as valuable as a TV impression?

You’re right in that the art of product integration is different in social video than on Netflix. But we’ve measured this and have data pointing toward the importance of “disclosure” around an ad creating more of an authentic connection between the brand and audience. When an influencer discloses less and people find out, they can feel conned because the connection is so strong between the influencer and their audience.

As a Bill Gates company, we’re very concerned about ensuring we’re following regulation around government disclosure, so we overdisclose. Disclosure, when done artfully by the influencer, only helps the cause in terms of impact.

What is your pricing model? I’m assuming this is a managed service and they’re not logging in there buying branded placements themselves.

Our model is based on CPM. So we typically guarantee views and an agency or brand pays a CPM based on the audiences we promise to deliver that will be very targeted to their needs. The majority goes to producers, and a minority of that money goes to producing the integration, which is real production work.

If a brand wants to do an integration, it doesn’t just magically appear on the screen. In order to be authentic, it really starts in the writers’ room, so there’s a huge coordination with them upfront and a huge logistics to get a product integrated. Integrating something like a car is not simple. And to ensure the video works out, you need supervision on set.

Where is viewership shifting most and what should advertisers be aware of?

Viewership is migrating at an astoundingly fast rate out of traditional broadcast environments and into streaming environments. Netflix, Amazon and Hulu are the big three, but then you have all of the other fringe SVOD services around the big three.

The second seismic shift is the migration of younger demographics to social video as their primary form of entertainment. Is YouTube a streaming network? You could argue that it is. It’s a little bit different than Netflix or Amazon, but 95% of the US population watches YouTube.

Brands we work with – General Motors, Heineken, Microsoft – used to spend a ton on TV and it’s not as effective as it used to be, so you see them moving some of that money into new-scale opportunities. The buckets of client money we’re competing for are in the genre of Facebook, Twitter and Snap. We want entertainment advertising to be every bit as meaningful to the marketing mix.

Interview has been edited and condensed.