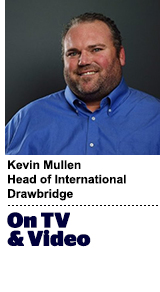 Today’s column is written by Kevin Mullen, head of international at Drawbridge.

Cable TV in the United States is easy to pick on. It’s expensive, we have thousands of channels we pay for but don’t watch, and the untargeted and unengaging ad formats make it almost unbearable to watch in real time. By most accounts, the cable box should go the way of the VHS tape and DVD as a content distribution tool, replaced by a fully digital alternative.

In Japan, this has already happened. Almost all content – even live sports – is delivered via apps and can support personalized advertising at the household level. Household viewing history and trends are being built into segments for desktop and mobile advertising, as well as being used for multitouch attribution models for cross-device and channel conversions.

It’s likely that hyperpersonalized targeting and retargeting will be commonplace in the next 18 to 24 months thanks to the booming Japanese ad tech market.

How did this happen? The Japanese networks went from a primarily ad-supported terrestrial TV model to an app-based model, which is also ad-supported. It was an easy switch in a country where less than 20% of households subscribe to a cable service.

But thanks to massive sports mega-contracts like Mike Trout’s, that simply won’t happen in the United States – at least not for a long time.

US networks have become more than comfortable collecting an advertising revenue stream plus a subscription fee for licensing their content to cable providers. The cable companies then bundle that content into packages sold as “value-added services” on top of their high-speed internet pipes.

Fox Sports 1 is delivered to around 90 million households, mostly on the basic-cable tier across most major providers. Of those households, there are only an average of about 180, 000 households viewing on any given day. But Comcast, Verizon, DirecTV and all the others pay Fox for all 90 million households who have access to its content. When Fox Sports 1 launched in 2013, that number was reported at $0.80 per user per month, or roughly $865 million a year.

That extra $800-plus million in annual revenue from content licensing allows Fox Sports to shell out the $3 billion over 20 years for rights to the Los Angeles Angels, which, in turn, have the ability to sign Mike Trout to a 12-year, $430 million deal.

The problem is that now that all that deal-making is done, it can’t be undone.

The consumer is stuck with cable and its closed systems, and advertisers are relegated to contextual targeting at the upfronts, instead of targeting their exact audiences and sending them relevant messaging on multiple screens, as they do in Japan.

That said, the number of US cord cutters is predicted to exceed 50 million in 2020, and 74% of US households already have at least one connected TV device, so even if there isn’t a clear market for app-based TV, there’s at least the foundation for one.

What if the recent spate of mega-mergers of cable providers and content companies pushed the market in this direction?

In theory, AT&T subsidiaries U-Verse and DirecTV shouldn’t have to pay fellow subsidiary TBS for World Series broadcasts. Likewise, Comcast shouldn’t have to pay NBC Sports for rights to broadcast the Olympics. It’s a ledger-shift. Going further down this path, AT&T could block Comcast from carrying the MLB Playoffs, and Comcast could keep the Olympics off AT&T services, and since these broadcasts wouldn’t be part of a cable package, it would force consumers to subscribe to both networks, in effect, creating app-based TV.

In the long run, this might be feasible. Consumers would get the freedom of app-based TV, and marketers would get the targetability and measurability they’ve long been promised. But for now, the onus seems to be on the cable operators to provide this. And in concept they can do this today.

Maybe it isn’t far-fetched. US marketers could actually be closer than we think to getting the targeting and measurement that digital TV promises. Though it remains to be seen if baseball salaries will ever come back to reality.