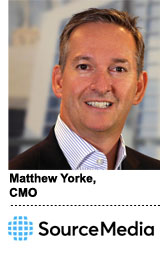 But increasingly, it’s turning to newer ad formats such as outstream video and native to capture more incremental marketing spend.

SourceMedia sees itself as a premium information resource rather than just a publisher, and it tends to attract a high-end, business-oriented audience.

Yet, B2B audiences are notoriously hard to monetize using video since they tend to seek information, not entertainment.

If a B2B site visitor does view a video, for example, it’s likely to be a tutorial or event footage from a conference. And those videos are not always easy to discover.

“Video on most B2B sites is somewhere users have to navigate toward, so it’s not always intuitive,” said Matthew Yorke, the CMO of SourceMedia and former CEO of IDG Enterprise.

Because B2B content is so specialized and vertical- or role-specific, it can be difficult for publishers amass a high enough view-through rate to make a CPM model effective.

Thus, monetizing through pre-roll typically requires a B2B publisher to sell on a sponsorship model against editorial content that aligns with a B2B brand, but that video content can cost a lot to produce.

So SourceMedia saw value in testing outstream video, a format that fits more natively into its existing site content across its properties. It is using Teads to supply its outstream video inventory.

Outstream video appears in-text and starts and stops when the format is in view and the user scrolls over.

Although publishers with high ad-blocking rates tend to shy away from outstream since some consumers find it disruptive, Yorke says SourceMedia doesn’t suffer from the same challenge. And that’s partly because it serves a lot of financial and technology decision-makers who pay for its content.

Monetizing through outstream will also allow SourceMedia to take advantage of a CPM-based model and increase views while still supporting viewability.

And SourceMedia claims its outstream formats will be more contextually relevant to the article content they appear against because of advancements in its tech stack.

For instance, SourceMedia recently rolled out a first-party segmentation tool called SourceCode that helps advertisers carve out audience targets based on different degrees of intent.

For one client, SourceMedia used its data and segmentation tool to develop a content series that was highly relevant to each of the client’s four key segments. As a result of tailoring messaging to its audience’s “intent” stage, it was able to deliver 348 new “leads” to the client off of a list size of about 12,000 (after guaranteeing 250 leads).

Over the past year, SourceMedia has also made investments in a customer data platform (Lytics) and a marketing automation system (Marketo), and all its websites have migrated to a new CMS.

These shifts in its tech stack provide a “persistent, unified, single-source view of our reader across online, offline, CRM and traditional site activity,” Yorke said. “We also look to add valuable data sets to our first-party data that allow us to do even more granular targeting or expand our ability to serve ads off our network.”