Professional drone racing is a sport for our socially distanced world.

Pilots race remotely wearing goggles that provide a first-person view from their drones as they whizz around 3D courses in neon lit arenas and outdoor tracks at nearly 100 miles per hour.

But drone racing was gaining momentum with viewers and marketers before COVID-19 was a thing and live sports went off the air, says Rachel Jacobson, president of the Drone Racing League (DRL), a pro league for the nascent sport founded in 2015.

“We have 250 million fans around the world, and over the past year alone we’ve seen a 200% uptick in viewership,” said Jacobson, who joined DRL in April after more than two decades as SVP of global partnerships at the NBA.

People are missing their sports, and DRL has attracted new fans during the pandemic, she said. In China, for example, where DRL launched last year, there was a 70% increase in viewing during the lockdown over the course of just a weeks from an already largish base of around 7 million viewers.

“Our goal now more than ever is to make sure we continue to offer these new fans the best programming we can throughout the next few months and into 2021,” she said.

Starting May 16 and through July, DRL will begin an eight-race series – the 2020 FanDuel DRL SIM Racing Cup – broadcast on NBC Sports Network featuring a dozen pilots racing in a drone simulator from their homes around the world, including the United States, United Kingdom, Canada and Switzerland. 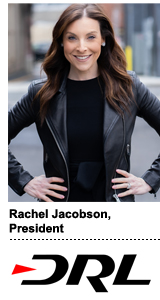 AdExchanger: Why join the Drone Racing League after more than two decades at the NBA?

RACHEL JACOBSON: I see this as the intersection of all the things I love – sports, technology and entertainment. And everything I learned during 21 years at the NBA I’m bringing with me to help accelerate DRL’s growth, from finding the right media and marketing partners to philanthropic-minded work.

When COVID-19 started, for example, we quickly brought a STEM program to market for school teachers to help them with that part of the homeschooling curriculum.

What’s the DRL pitch to marketers, and are they buying in?

The opportunity for brands is to align with an innovative, technology-first sport. That includes everything from partnerships for title races as part of the season schedule to customized integrations during the programming. We’re always talking to our engineers and thinking about what we can build together. What gets me excited is that there are no guardrails around what we can do.

Who are some of your brand partners?

We’re launching our first-ever virtual drone racing series on May 16 on NBC Sports Network and DRL’s Twitter. FanDuel is our title sponsor. Fans will be able to tune in to enter a free daily fantasy sports contest and win prizes after each race, and the pilots will donate their winnings from the event to support healthcare professionals.

We also have Allianz and the US Air Force as league partners. Allianz is presenting our entire 2020 racing season.

Who is your audience?

We have a global footprint, so it’s a global audience. They’re early adopters of technology, they like speed and they’re tech savvy. Our highest concentration is fans between 13 and 34, although we skew more on the younger side. It’s a highly coveted group that marketers want to reach.

Is there an overlap with other more traditional sports?

Esports, motorsports like Formula One, and a bit of NASCAR, as well. They like fast things. But we also bring in fans that are used to the traditional stick-and-ball sports they grew up with. It’s family-friendly entertainment with no violence. Kids can come with their parents and grandparents.

What’s it actually like to watch a drone race?

It’s quite a spectacle. Each drone has 1,000 colorful LED lights, there’s music playing and they can go from zero to 90 miles per hour in one second. Pilots compete in heats until they reach the championships.

There’s a rush and a thrill with drone racing that we’ve found can be as appealing to older generations of sports fans as it is to the next generation of sport fans who grew up with this technology.