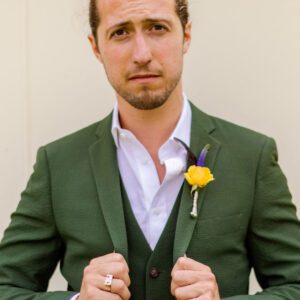 Google’s decision to delay third-party cookie deprecation in Chrome until 2023 came the day before Salon CRO Justin Wohl’s wedding. Salon had converted its ad business to an open-web programmatic model a few years earlier, so the brief reprieve from signal loss came as a huge relief and another reason to pop some champagne.

Since then, Wohl has been hands-on with Salon’s ad tech partners to lay the groundwork for effective post-cookie monetization on the open web.

Wohl spoke to AdExchanger about the need to standardize how exchanges ingest seller-defined audience data, Salon’s stance on private marketplace (PMP) deals and its revenue diversification efforts – including a new emphasis on paid subscriptions.

AdExchanger: How is Salon generating consistent revenue from its digital publishing business?

JUSTIN WOHL: When I joined Salon in 2017, month-to-month cashflow was under water. We adopted a fully programmatic model. Since 2018, more than 95% of our monetization has been through open-market programmatic. We also have revenue from subscriptions and commerce, but both are single-digit percentage points.

What areas of ad tech are you especially focused on now?

I’m dug in on seller-defined audiences, which lives at the IAB [Tech Lab] level and has yet to be adopted by the industry.

We’re partnered with Carbon RMP, which was recently purchased by Magnite, and Audigent. Their scripts run on page and generate first-party data.

One of the most useful data signals for seller-defined audiences is IAB’s contextual category taxonomy, but each exchange needs the data to be packaged differently. So I’m tailoring bid requests to replace what advertisers otherwise rely on cookies for. I’m asking, “What signals do your DSPs want so I can populate them when the bid request is formed?” But it’s unsustainable to tailor seller-defined audience data for 15 or 20 exchange partners.

What needs to change before seller-defined audiences will be more widely adopted?

Seller-defined audiences have to be certifiable, because buyers are concerned they’ll be sent bad signals. Prebid 7.0 will include a transparency framework.

Because Salon is so reliant on open-market business, the loss of cookies and a buyer’s ability to value our inventory appropriately is one of my biggest concerns. But if buyers can still use cookies they’ll keep doing so. We won’t see the full value of seller-defined audiences until cookie deprecation actually happens.

We don’t have any direct sales efforts or PMPs of our own.

The whole programmatic ecosystem benefits from scale, so PMPs are better fulfilled at the exchange level, where they have scale across multiple publishers. So many individual publishers chase PMP deals and they don’t fill, or the agency contacts disappear. It’s so much labor to get a little focused spend.

What are Salon’s plans for its subscription business?

We have a few thousand subscribers who get an ad-free reading experience. We don’t monetize our app with ads. It has a meter, and you can pay for unlimited access.

I expect to acquire 10,000 new subscribers in the next six months. We have new messaging around supporting independent journalism that goes live in July.

We tried CTV – we were on Roku and Fire TV – but app downloads weren’t enough to be meaningful. We decided to push our content to syndication platforms versus maintaining our own channel.

Salon has five newsletters. When a user clicks through from email to website, we can grab that email address and use it to fuel identity solutions. For publishers without a big logged-in user base, this is a way to capture authenticated traffic. That’s why we dove into it a year ago.

We’re also interested in revisiting podcasts, but it’s not a priority. Audio monetization partners told me you need 20,000 listens per episode.

What channels should be – but aren’t – easier to monetize?

Publishers need to be in syndication apps like Newsbreak and Smart News to be discovered. Originally, these aggregators would direct traffic to your website and you’d monetize that. But they’ve shifted to native views, so the content gets viewed in-app, they monetize it and pay you a rev share.

It’s frustrating because I don’t have clear reporting or understanding of the tech they’re using to monetize. We don’t get the revenue per thousand impressions (RPM) warranted by our mobile web performance. These apps are not anywhere near where we are in terms of programmatic technology or thinking about bid requests and buyer behavior. If they’re going to be critical to publisher distribution, they should be responsible for monetizing to their maximum potential.

What about social media monetization?

The Wall Street Journal recently published an article about Facebook not renewing its deals with corporate publishers. While I feel bad for those companies losing these sweet deals, Salon and so many other publishers that are at the whim of Facebook’s algorithms never had a chance at guaranteed money or exposure like that. I hope, without those guarantees in the system, more opportunity comes to small and midsize publishers.

We’ve been close-ish with Facebook on the news tab rollout and a yearslong adopter of Facebook Instant Articles. Neither resulted in consistent, meaningful performance.

Some months, we’ll get a ton of Instant Article traffic. Facebook has all the user data, so CPMs and RPMs are quite good. But a publisher doesn’t find out something has changed until it’s reflected in traffic. Then there’s a cycle of “Help, what happened?” and “That representative is no longer on the team. We’ll figure out who can get back to you.”

Meanwhile, you’re floundering because your Instant Article traffic is down, so revenue is down. It’s a helpless sensation.

Salon was publicly traded before being acquired by Proper Media for $5 million in 2019. What do you make of BuzzFeed’s market cap plummeting since its IPO?

It’s expensive to maintain a public shell on top of baseline profitability. Accounting, legal requirements and filings are all added costs to publishing, which is not a high-margin business. The New York Times might disagree because they’ve got all their subscription money, but that’s not the norm.

I have no interest in going public again, answering to the market and having cyclical changes hit us extra hard. A publisher whose RPMs drop as a result of cookie deprecation is going to be punished in its valuation. Battling devaluation by the demand side and devaluation by your investors is a nasty pickle I don’t want to be in.