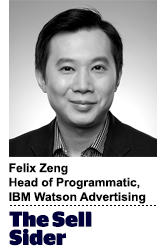 The downward-sliding scale of third-party identifiers is leaving publishers and marketers scrambling to figure out what will replace the digital currencies that we’ve relied on for decades.

We now must ask ourselves: Are we going to be complacent with accepting walled garden dominance, or will we take control of our own destinies?

With so many companies frustrated by the dramatic shifts in identifier timelines and availability – and at times misleading consumer education around them – we’ve seen a call from the industry to urgently embed alternative solutions, many based in progressive technology like AI. While in the short term, marketers can reallocate spend from Apple iOS to other platforms with identifiers, that solution will only work for so long.

In the long term, there need to be solutions to connect data from publishers to data from marketers. One promising solution, which has already found success with both brands and publishers, is programmatic guaranteed (PG).

Advertisers and agencies still want the benefits of programmatic, even without traditional identifiers, so it is unlikely we will revert to a business based on the insertion order.

Furthermore, PG maintains the critical relationship that is built only between advertisers and publishers. By embracing PG, publishers, ad tech companies and agencies can build a cleaner and likely more effective ad ecosystem.

In a future without traditional identifiers, buying ads in the open exchange will make less and less sense. (There are already diminished CPMs on iOS from the reduction of IDFA). And since publishers aren’t likely to provide all their data to the open exchange where its use can’t be controlled, it’s very likely we will see a significant shift in spend from the open exchange to private marketplaces (PMP) and PG.

But taking on any technology is a risk that requires weighing the impact to publishers, ad tech and buyers.

Each publisher’s first-party data sets are unique and may not operate as a uniform digital currency, which leads to problems throughout the funnel. Also relevant: Not all participants in the ad tech ecosystem (DSP and SSPs in particular) can use first-party data as effectively as a publisher can. Be mindful here, as this can cause the data to be less relevant and render campaigns less effective.

However, ad technology partners and publishers are coalescing around a set term of definitions regarding how audience segments are created, what inventory is available, as well as aggregating first-party data from several publishers. Additionally, SSPs and DSPs are actively improving how quickly they refresh publisher first-party data, making the data as effective as if it were coming directly from publishers. These advancements can make PG an easier solution to scale.

This, however, is all for naught if we don’t remain cognizant of user privacy at every step. While developing your first-party data strategy to use in the PMP and with a PG solution, ask yourself: Is this privacy-forward? Would we be able to fully communicate how this product works and how data is being used to the consumer? Would we be comfortable using this product ourselves?

An additional consideration for publishers, since PG is similar to premium sales, is how to teach your PMP sales team to become great PG sellers. Publishers with a premium sales team should understand that as more deals go through the programmatic pipeline, your premium sellers need to care. That might be a challenge at the start, but in my experience at IBM, the camaraderie developed between the premium and PMP sales teams delivered both insights and higher revenues.

Programmatic guaranteed is already showing us what the ad world will look like after the demise of traditional identifiers. But this much-needed transformation cannot happen until more participants embrace PG. Make the shift now, and we will all be better prepared to take control of our own destinies and achieve revenue independence.