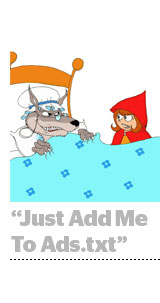 In the email, Thrive+ head Fiona Walsh wrote: “Thrive+ has been purchasing a substantial amount of your ad inventory through various ad exchanges over the past year on behalf of our advertising clients and needs your assistance to continue. … If you do not add the IDs you will be adversely impacted.”

“These are [exchange] domains that we see when we see problematic ads in our site, like when they load a video player into a 300×250 and use that video player to request ads,” the publisher source said.

Update:  In documentation provided to AdExchanger, Blue Water Ads indicated that its request to be listed on Ads.txt came in the context of a deal negotiation, so its outreach to the publisher wasn’t strictly unsolicited. Blue Water Ads also stated its request only covered “reseller” and not “direct” tags, except in one instance.