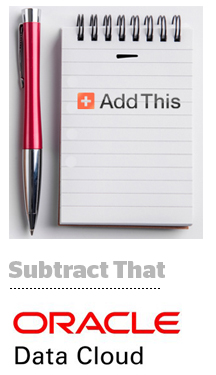 Looking for AddThis audience data in the EU? You won’t find it.

Oracle Data Cloud has quietly pulled the plug on that business line.

Although Oracle declined to say exactly when it began shutting down AddThis, the process started at some point in the last number of months.

Under the General Data Protection Regulation, unconsented third-party data – the lifeblood of the AddThis audience asset – is a form of kryptonite that Oracle Data Cloud (ODC) wants nothing to do with anymore.

Oracle Data Cloud’s VP of product management, Cecilia Mao, confirmed the move with AdExchanger. Although ODC will continue to make AddThis tools available to European publishers for free, “we no longer use AddThis data originating from Europe to create audiences.”

Rather than terminating its contracts with its data provider and ad network partners, though, a source with direct knowledge told AdExchanger that ODC allowed its AddThis contracts to slowly expire over the course of many months and then made no move to renew.

The problem with AddThis data in Europe is there’s no easy way to get informed consent.

And, in the current climate, no legal basis for data processing other than consent will do, declared ODC SVP and GM Eric Roza at AdExchanger’s Industry Preview show in January.

“Anyone who is relying on legitimate interest to do advertising, audience-based advertising, is putting themselves and their company at risk,” Roza said.

But it’s not all sunshine, roses and crises averted, phew.

ODC’s data marketplace, BlueKai, used to rely on AddThis data to help beef up its segments, and purging AddThis third-party data from the European market has a downstream impact on that revenue line.

Two data companies based in Europe told AdExchanger that ODC has been out there knocking on doors to try and find a replacement for what it lost when it shut off the AddThis spigot.

“They’re looking for replacements and to control the relationship,” an executive from one of the companies said.

Back in 2016, however, when GDPR was still a blip on the horizon, ODC was more than happy to pay around $200 million to acquire AddThis, which started life as a free-to-use social bookmarking and content recommendation widget for publishers. At the time of the acquisition, AddThis claimed that its code was embedded on around 15 million global domains.

But those services were free because AddThis, like other social sharing plugins, tracked URLs and user IDS, packaged that log-level data and sold it to companies looking to build or augment user profiles.

When AddThis became a part of ODC, its data was also used to create or enrich non-branded segments in the BlueKai marketplace.

However, there wasn’t any consent mechanism to alert website visitors that AddThis collected their data, a potentially illegal business model under European law.

And the risk isn’t worth the small amount of revenue AddThis data brings to ODC in Europe. Regulators are looking for big targets. If Google’s in the crosshairs, why not Oracle next?

Added Roza: “We’re not going to be the poster children for this.”

But smaller data companies won’t change unless they’re forced to. They’d rather take the risk than shutter their businesses or attempt a pivot. And it’s not the smartest move, said Matt Prohaska, CEO of Prohaska Consulting.