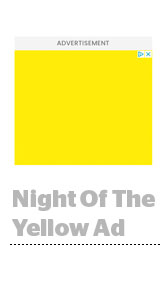 From 7 pm to 7:45 pm on Tuesday, publishers saw mysterious yellow 300×250 ads blanket their sites. Paying CPMs north of $20, the yellow square ad elbowed out other buyers with its big spending. Hourly revenue spiked many times over publishers’ normal averages.

Turns out, the yellow ad appeared across the United States and Australia because of a training mistake made by a Google team that helps customers learn how to use the platform.

“It went further than planned,” said a Google spokesperson.

The ad campaign spent at least $1.6 million in less than an hour, based on figures AdExchanger could confirm, but total spending may have exceeded $10 million, sources estimated, based on the number of publishers they knew were affected.

The scale of the mistake is unprecedented and the worst in memory among the many ad tech veterans and programmatic publishers contacted by AdExchanger. Like drops in the stock market due to electronic trading gone awry, the yellow ad shows how automation can magnify tiny mistakes.

Some individual publishers and exchanges saw more than $100,000 in advertising spend for the yellow box ad within the 45-minute span, while other publishers tallied up spending in the five figures. Due to the high CPMs paid by the yellow ad, ad management firm Mediavine observed an 840% increase in hourly ad spend – in addition to the likely hefty revenue, which it declined to disclose.

As publishers scrambled to figure out what happened, they worried they wouldn’t be paid for what they imagined was malware or a rookie trader’s mistake. Digital media companies, already in an embattled climate, fully expected to have to fight to be paid or on the hook for another’s error.

Multiple sellers noted that Google offers monthly refunds for invalid traffic without providing details about what inventory was fraudulent and when. Publishers feared the buyer would refuse or be unable to pay, or they would see a larger than normal refund for invalid traffic.

But Google said it will pay publishers for the yellow ad. Sellers contacted breathed a sigh of relief, posted a happy emoji on Slack and put their heads down to get back to the Q4 hustle.

Google said it’s conducting a post-mortem on the mistake and erecting guardrails to ensure it doesn’t happen again. It said the mistake didn’t affect other advertisers – and it didn’t have any information about what happened to the individual who set up the campaign.