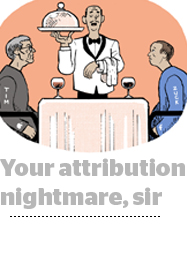 This is part one of a two-part deep dive series on the changing face of attribution.

Facebook’s had a tough time of it recently.

There was the explosive Wall Street Journal Facebook exposé, whistleblowing on Capitol Hill and the stock market’s reaction, which shaved tens of billions off Facebook’s valuation in a single day.

But Facebook is also grappling with another major headache: the loss of signal and what that means for its ability to measure ads and conversions.

No longer made to measure

The Facebook ad platform – which always seemed able to forge ahead regardless of scandals or rough headlines – has been put through the ringer this year due mainly to Apple’s AppTrackingTransparency (ATT) framework, which launched in 2020 and has steadily rolled out over the course of this year.

From a user perspective, ATT is the new consent request Apple requires for any non-Apple app in order to track users for marketing and other purposes.

The ATT update is particularly damaging to Facebook because Facebook derives a great deal of value from having its SDK plugged into so many outside apps and from its attribution pixels littered liberally across the web. Facebook – and each of those third-party apps – must now get permission from every user, or that user data flow will be blocked by the operating system.

Losing visibility into iOS is a big deal. Apple device owners generate multiple times more revenue than Android users through in-app payments and subscriptions – but they also have access to a top-notch camera. Facebook, whose ad platform includes Instagram, has a vested interest in staying close to this lucrative segment of the market.

In short, Facebook’s attribution system cannot simply move ahead without the iOS user data it’s losing. That is why over the past year, and even in the last month, Facebook has made important changes to its attribution standards.

Facebook is pushing advertisers to use its Conversions API, a  server-side developer toolkit for user data and measurement that allows advertisers to send web events from their servers directly to Facebook.

And the company is also advocating geo-testing as a new attribution model – mainly because testing by zip code or market doesn’t require user-level tracking by the advertiser.

Even so, there’s no disguising the impact that this loss of user data is having on Facebook’s measurement systems.

Aggregated Event Measurement, for example, a protocol that Facebook introduced to address Apple’s iOS 14 updates, limits the number of trackable “conversion events” to eight. That may not register as a big deal to people who aren’t in the weeds on Facebook attribution, but advertisers might use dozens or even hundreds of conversion events across campaigns.

Any domain an advertiser uses for ad click-throughs – a merchant’s homepage, say, as well as specific product pages – requires a conversion event for campaign analytics. And to layer in Facebook’s conversion-based optimization, advertisers must commit at least four of their conversion events to that metric. Add-to-cart would be its own conversion event, as would checkout initiation. Advertisers might have different conversion events set for content marketing or blog pages than they do for product sales or their main service page.

That doesn’t leave a lot of wiggle room.

Facebook attribution windows have also taken a hit. Facebook used to have so much data coming in, advertisers could optimize campaigns on the fly or create practically endless lookalike audiences, even with granular targeting parameters (e.g. women aged 18-35 in midwestern cities who like to travel and follow cosmetics brands).

App-install page attribution windows are limited to one day during which a user can be retargeted or attributed to the ad that drove the click. Advertisers previously could attribute on 28-day windows for ad clicks or use 7-day view-through windows to track whether a user who visited a site also saw an ad.

Facebook advertisers have reduced spend by about 30% on average. But the biggest hit has been to advertisers that sell items in the hundreds or thousands of dollars range, said Rok Hladnik, a Facebook performance marketing consultant.

The longer attribution windows were prized by big-ticket sellers because expensive purchases often include more research or consideration beforehand. [Then again, they weren’t ideal for everyone.]

What Facebook’s attribution changes often mean in practice are optimization and analytics come at a slower pace.

“Consider waiting a minimum of 72 hours or the full length of the optimization window” before optimizing campaigns, wrote Graham Mudd, Facebook’s VP of product marketing, in a blog post last month on new measurement practices.

A call for Zen-like patience is a big change from the go-go-go optimization mentality that elevated Facebook’s ad platform.

Mudd also suggested that advertisers “analyze the campaign, not the creative.”

That might sound like a rather bland, even hokey, nugget of wisdom, but it represents another momentous shift for Facebook. An important differentiator for Facebook has been its ability to test so many ad permutations and targeting parameters. Sometimes dozens or even hundreds of tweaks to ad copy or creative elements might be running and testing simultaneously, all of it optimized based on conversions within specific audience categories – and all happening while a campaign is in flight.

Now, Facebook recommends all similar campaigns – any ads driving to the same page, for instance, or ads that use similar creative – be consolidated.

Whereas in the past a brand may have targeted men versus women, for example, or music ticket-buyers versus sport fans, by making changes to the ad creative and a campaign’s attribution goals, Facebook now suggests combining these targets into a single campaign. By consolidating those campaign branches, advertisers lose the scalpel-like targeting they’re used to but have a larger pool of conversion data for Facebook to create statistically significant attribution models.

The upshot of all this change is that Facebook is grappling with how to continue to operate effectively – essentially, how to do more – with less data.

One of the things Facebook has done is to nudge (or in some cases full-on force) advertisers into channels that improve Facebook attribution.

For instance, if an advertiser optimizes a campaign based on site conversions or any in-app events, that campaign is automatically added to Targeting Expansion, a product launched last month that serves a portion of the budget to new types of users outside the advertiser’s pre-set targeting parameters.

Facebook advertisers are accustomed to campaigns expanding outside campaign seed audiences. Because there was so much user-level data available, the Facebook algorithm could spot lookalikes everywhere. Now, Facebook must work harder to coax advertisers out of their original campaign audience sets in order get its optimization flywheel moving again.

Last year, the company launched Shops, a Facebook storefront brands can set up on the platform or via an integration with Shopify. Facebook recently began offering ad discounts for brands to send traffic to Facebook Shops, as opposed to their own sites, Hladnik said.

First-party ecommerce data is extremely valuable for Facebook. Amazon’s attribution isn’t handicapped by ATT because it sees so much transaction data, not just web browsing or user events in other apps.

But Facebook Shops is no Amazon, and because they don’t convert as effectively, Hladnik said, advertisers aren’t sold despite the discount.

Another priority for Facebook is geo-testing. Facebook is privately testing market-based user measurement in its data clean room, said Madan Bharadwaj, co-founder and CTO of the attribution firm Measured. Geo-testing will be “the gold standard” for Facebook and other platform attribution, he said, because it demonstrates a campaign’s incremental contribution to sales without tracking individuals.

Although Facebook gets less data from individuals on iOS devices, the supply is still large enough to attribute based on what it sees in a market or zip code.

The only other option is to temper advertiser expectations

For example, Facebook’s latest measurement update is to pre-campaign audience reach forecasts and its “estimated daily results” metric, which provides advertisers with an expected reach projection for the upcoming day based on their budget and goals.

Now, those estimates come as a range, instead of a hard number. The estimates will also start to come down, since Facebook can’t easily distinguish between when a campaign retargets an Apple device owner and when it reaches a new user.