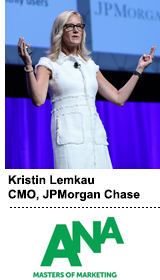 Despite a year marred by brand safety blunders, measurement errors and targeting missteps, marketers are mending ties with Facebook and Google as they place blame for the industry’s many issues on its ad tech underbelly.

In 2016, more than half of Fortune 500 companies saw their revenues decline, Liodice said. That loss in market share can be traced back to lack of leadership by marketers and their continued spending on a “byzantine, nontransparent, super complex digital media supply chain.”

“As leaders, we, as an industry, have refused to make the tough calls that would take us out of the cesspool of sub-optimum growth,” he said. “Yet we keep feeding the beast by pouring incredible sums of money into this unproductive, unmanageable abyss.”

Procter & Gamble Chief Brand Officer Mark Pritchard continued his rallying tour for a more transparent and efficient media ecosystem by asking marketers to “transform everything you’re doing to drive growth.” They should start by reexamining the vendors through which they funnel their digital media spend. P&G has been on an industry transformation crusade for the past year, culling its agency roster, cutting $100 million of ad spend and limiting its buys to roughly 200 trusted media partners.

“In 2017, the bloom came off the rose for digital media,” Pritchard said. “The reason is the huge waste in the murky, nontransparent, even fraudulent digital media supply chain. We stopped buying media from the long tail of thousands of websites, a massive source of bots.”

But when it came time to talk about brand safety, an issue that led hundreds of advertisers to pull spend from YouTube this year, Pritchard lauded platforms like Facebook and Google for stepping up to help brands navigate their platforms safely.

“We’ve joined YouTube to identify their best channels that are 100% safe and far more engaging,” Pritchard said. “And we’re working with Facebook, Snap, Twitter and Tencent to elevate the quality of content for consumers to enjoy, and for brands to advertise on.”

“Google and Facebook have extraordinary reach and the ability to personalize, but the genius is that the ad unit is based on the concept of permission,” she said. “Everything else is pollution. Even if it’s viewable, people hate it, and they hate us for putting it in front of them.

Meanwhile, she slammed ad tech vendors for perpetuating fraud that plagues the industry.

“Ad fraud is getting worse, and there are 5,000 ad tech, mar tech, whatever tech companies that all say they have the answers,” she said. “You can no longer entrust it to an agency, a platform or a machine.”

Behind the finger-pointing was a prevailing sense of urgency around the idea that, for marketers to take back control of spend, they have to start by overhauling the current digital supply chain.

“CMOs operate in the most nontransparent marketing ecosystem in our industry’s history,” Liodice said. “The willingness to trade off transparency for digital and technological innovation is over.”