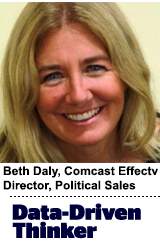 With the tumultuous 2020 election behind us, some may say we are currently in an “off year” for political advertising. But the truth is, there are no “off years” anymore. With an increasingly divided and competitive political climate across the U.S., and dollars flowing in record volume, every year is a busy one for political advertisers.

This year, the big races were the gubernatorial campaigns in New Jersey and Virginia. The Virginia primary was more crowded than any other in modern history, and proved to be a contentious fight. In both states, there were a slew of candidates for both races and huge amounts of dollars flowing in.

There are important stories beyond the races for governor as well: For the first time in living memory, there are Democratic and Republican candidates in almost every district in Virginia – a notable increase from 2015, when only 29 of 100 districts were contested by both parties. Add to that the pandemic factor, plus a close eye on how former President Trump’s allies will fare after he left office, and it’s a political year with outsized importance.

Political advertisers across the country are looking to the 2021 races as the bellwether for the midterm elections next year, when control of the House and Senate is on the line. During the Virginia and New Jersey governor races, we saw earlier spending, greater spending and greater use of data in advertising. And each race contained a lesson for what’s to come in the elections ahead.

This year, political candidates jumped in earlier to get their message out. In Virginia, Republican candidates began advertising in January 2021 – four months ahead of the May 8th convention. Democrats were not far behind, putting their ad dollars in play two months before the June 8th primary election. In fact, by March, two Republican gubernatorial candidates in Virginia – Glenn Youngkin and Pete Snyder – had already spent an unprecedented $2 million in TV and radio ads.

Candidates must have a strong fundraising operation and media plan to increase name recognition earlier than ever before. This is not a surprising trend – research has shown that across advertising categories, and regardless of spend levels, 90-day campaigns consistently achieve higher household reach than 30-day campaigns. Political advertising is no exception: In the years ahead, expect to see candidates’ faces on your TV screens well before the traditional “political windows” begin for each race.

Political ad spending has dramatically increased in the past decade. In Virginia, first-time political candidate Glen Youngkin, former co-CEO of a global investment firm, ultimately beat out many career politicians for the nomination, helped in large part by spending $12 million of his own money on the campaign. Youngkin won the race on Tuesday, and is now governor-elect.

Meanwhile, in New Jersey, Democratic Governor Phil Murphy spent more than all his opponents combined running for New Jersey governor in 2021, despite the fact that he doesn’t face any challenges for the Democratic nomination – he, too, is a former financier with an estimated net worth in the hundreds of millions of dollars.

Why the drastic increase? The jump is in part due to today’s contentious political atmosphere, no doubt. But there is another factor at play: fragmentation of video viewership. To reach their audiences, political advertisers are looking beyond traditional TV. In the gubernatorial races, we’re seeing candidates using set-top-box data to target a deeper list of networks than in past years, and extending campaigns to video on demand (VOD) and connected TV (CTV).

In the past, political advertising strategies focused on local linear broadcast. However, since so many voters now watch TV across multiple screens, a simple local linear strategy is insufficient. This is where data comes in.

Greater use of data

In both New Jersey and Virginia, campaigns used data to target audiences beyond simple geography. This was especially important in Virginia, where Republican primary candidates were laser focused only on reaching 50,000 conservative delegates, rather than the whole state.

Political advertisers in 2021 are learning the importance of stepping out of their comfort zones – buys on broadcast news, primetime, and top networks – and instead trusting what the data reveals about their audiences’ behaviors.

For example, in late 2020, nearly three-quarters of live TV viewing occurred outside of primetime, and 71% of TV viewing time was spent on cable versus broadcast and premium networks. This data suggests that cable news and all-day advertising may be a better bet for political advertisers than a more traditional local primetime broadcast buy.

The gubernatorial candidates in New Jersey and Virginia listened to the data and reached their audiences where they were. In Virginia, Republican candidates spent almost all of their advertising budgets on cable, mainly Fox News and other Republican-skewing networks to reach their voting delegates. In the New Jersey primary, half of Phil Murphy’s media spend campaign and 100% of Jack Ciattarelli’s budget went to cable, as they moved away from a traditionally heavy reliance on local broadcast. Overall, as audience viewing shifts, spending is moving with it and savvy marketers are increasingly trusting the data to guide their spend allocations.

As an industry, we can expect greater ad spending and earlier ad spending for the 2022 races, but more important than that will be the use of reliable, quality data to ensure a candidate’s message is reaching the right voters in the right places.

2020’s accelerated shift to audience-based buying is already influencing how candidates are approaching political advertising this year, and no doubt are indicative of a larger shift as we enter the 2022 elections.