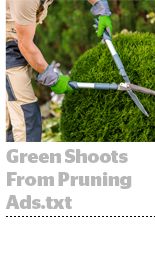 The idea behind Ads.txt was simple: publishers create a public list containing the names of all the partners they work with, and buyers check that list before they buy.

But even the simplest of ideas can get complicated when they go from paper to reality.

Some publishers just said “yes” to every request to add vendors to their list, while others did remove partners from the list, but then continued to work with them.

In this way, publishers can amass thousands of lines of text, which is the opposite of simple.

Plus, errors happen. A publisher might wonder why a buyer isn’t purchasing its inventory – and the answer could be that the buyer made a mistake and the Ads.txt file and Sellers.json file (the buy-side version of Ads.txt) don’t match.

Primis operates a video player on publisher sites. Because publishers had to add Primis to their Ads.txt files, the company experienced firsthand the burden that managing these files placed on publishers.

“Ads.txt and Sellers.json are great from a tech standpoint, they just aren’t accessible enough,” said Primis Co-CEO Rotem Shaul. “We started noticing our publishers were being manipulated into doing bad stuff or, from time to time, mishandling Ads.txt.”

Sellers.guide analyzes not only a publisher’s Ads.txt file, but also the Sellers.json files of its partners. In addition, it gives publishers a transparent score, flags potential problems and shares tips on how to solve those problems.

The stakes are high. Working with tons of resellers can slow down a site and harm the user experience.

Publisher revenue suffers too. DSPs can punish publishers for facilitating this messy buying experience. It’s burdensome and wasteful for DSPs to listen to duplicate bid requests from the same publisher. If a publisher sends out hundreds of ad requests for each ad impression because it’s given resellers free rein of their inventory, DSPs will respond by capping bid requests. Less demand means lower revenue for publishers.

Investing.com, one of the test publishers using Sellers.guide, had previously undertaken a project on its own to reduce its Ads.txt files. In the three years since Ads.txt was introduced, Investing.com had added more and more partners without removing lines.

Head of video and programmatic monetization Yoav Raif estimates that it took two months of going through its Ads.txt files to prune its partner list down to a manageable size.

“We didn’t know the consequences of having such a huge file,” Raif said.

Since pruning its Ads.txt file, Investing.com has seen performance improve across the board. The site is loading faster, and average bid responses have improved now that the site is easier for programmatic algorithms to evaluate.

“We saw an extreme spike in eCPM from the moment we cleaned up the Ads.txt file,” Raif said.

Working with Sellers.guide – even after doing the bulk of the work manually – helped solve a few outstanding mysteries.

Investing.com had started working with Adform, but there was something wrong with the pipe. Three months in, the deal didn’t achieve the potential Raif thought it could.

“Then I used Sellers.guide and found out that Adform did not add our sellers ID to the Sellers.json file. They fixed it, and we tripled our revenues,” said Raif, who noted that the process of streamlining Ads.txt has also simplified its supply path optimization initiatives across the board.

Because Sellers.guide allows publishers to easily audit Ads.txt files (which are posted publicly), it can also be used to gain competitive intelligence. Raif uses it to keep tabs on competitors or publishers that he knows have forward-thinking approaches to their advertising. If they add or drop a partner, he takes note.

Primis originally created Sellers.guide as marketing tool for its business. But Shaul sees it as something that could help programmatic advertising.

“If a publisher doesn’t know how to use the Ads.txt file correctly,” Shaul said, “it will affect the whole industry.”